An Exclusive Excerpt of EXERCISE IS MURDER #cozymystery 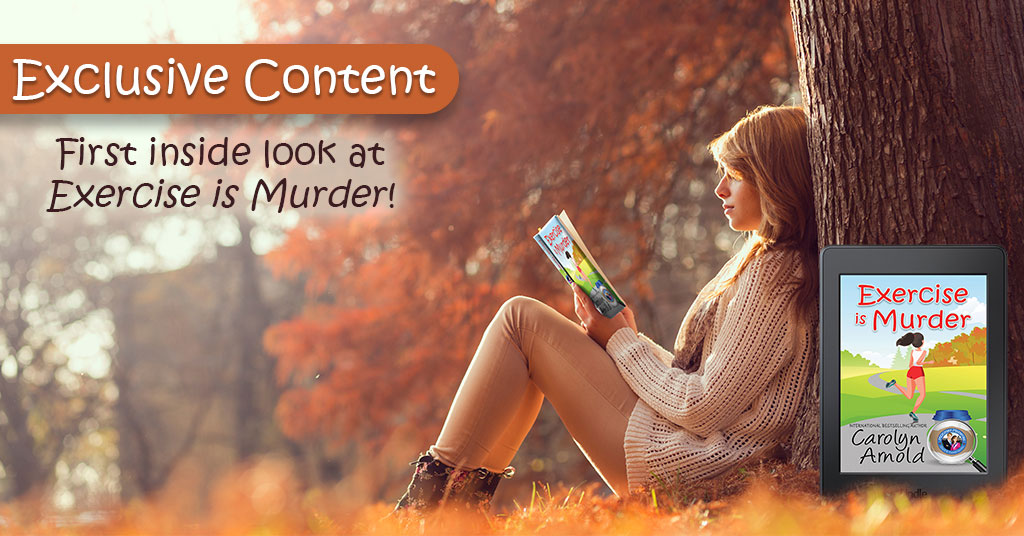 With the release of Exercise is Murder just next week, I thought you might enjoy the following excerpt from Chapter 3:

The phone buzzed on her desk, and the tone let Sara know it was Helen calling from the front desk. Sara got up and hit the speaker button. “Yes?”

“There’s someone here to see you. She says her name is Mirela Craciun.”

Sara could hear someone talking to Helen in the background.

“Yes. I know Mirela. I’ll be right there.” Sara was about to hang up when Helen spoke again.

“It might be better if I send her back.” Helen was talking quietly, and Sara got the sense something was wrong.

Helen hung up, and Sara went to her office door to watch for Mirela. When she saw her approaching, Mirela wasn’t the same woman who had left her house that morning. The usually self-assured woman appeared to be trembling, and her shoulders sagged.

“Come in. Sit wherever you’d like.” Sara’s impulse had been to ask Mirela if she was all right, but the answer to that was obvious.

Mirela dropped onto a couch that Sara had in her office. “I’m sorry to bother you like this.”

“No bother.” Sara closed the door and sat beside Mirela. Only one thing would bring Mirela to her door: death. Sara put a reassuring hand on Mirela’s forearm. “Who was it?”

Mirela worried her lip, her eyes wet and glazed over. “One of my clients.”

“What happened to her?”

Tears fell down Mirela’s cheeks, and Sara got up and grabbed a tissue box from her desk. “Here you go.”

Mirela took a tissue, dabbed her eyes, and dried her cheeks. “Thank you.”

“It’s okay. Talk to me.” Most people had a hard time talking about death, and pretty much everyone would prefer to live in a world of make-believe where it didn’t exist.

Mirela lifted her head, tilted out her chin, and sniffled. “She’s dead.” She tossed out the two words like stones into water—and they sank. “She died a couple of weeks ago while she was on a run through Corning City Preserve.”

Sara was familiar with the trails that ran through the preserve and along the Hudson River. Some areas were quite isolated, and her mind started churning out worst-case scenarios. “I’m sorry to hear that.”

“Two weeks ago,” Mirela stressed, “and I had no idea until now.” She paused and pressed a tissue to her nose. “She’d canceled a few of her sessions, so I wasn’t expecting her until this morning.”

Sara glanced at the clock and saw that it was now close to one. Where had the morning gone? “And you didn’t hear from her, so you called?” Sara asked, applying gentle pressure.

“Yeah, and some guy answered. Said he was Levi Bradley. You know, the baseball player?”

Sara had no idea. Neither Sean nor she followed sports. They didn’t have the time even if they’d wanted to. “I don’t, but why was he answering her phone?”

“I assume Katie was your client?”

“Oh, yeah, Katie Carpenter. Guess I hadn’t said her name. Levi said the police are saying it was an accident.”

Accident was a trigger word for Sara. “Can you tell me any more?”

“Apparently, she fell from a path that runs along the top of a hill, tumbled down, and wound up facedown in the Hudson River. I don’t think she fell. I think someone pushed her.”

Chills went down Sara’s arms, but she could hear Sean’s voice directing her to logic. “It’s never easy to accept the death of someone we care about.”

“Sara, I am being very serious with you right now. Someone killed Katie, and I need you to find out who.”*

*The above excerpt is protected by copyright.