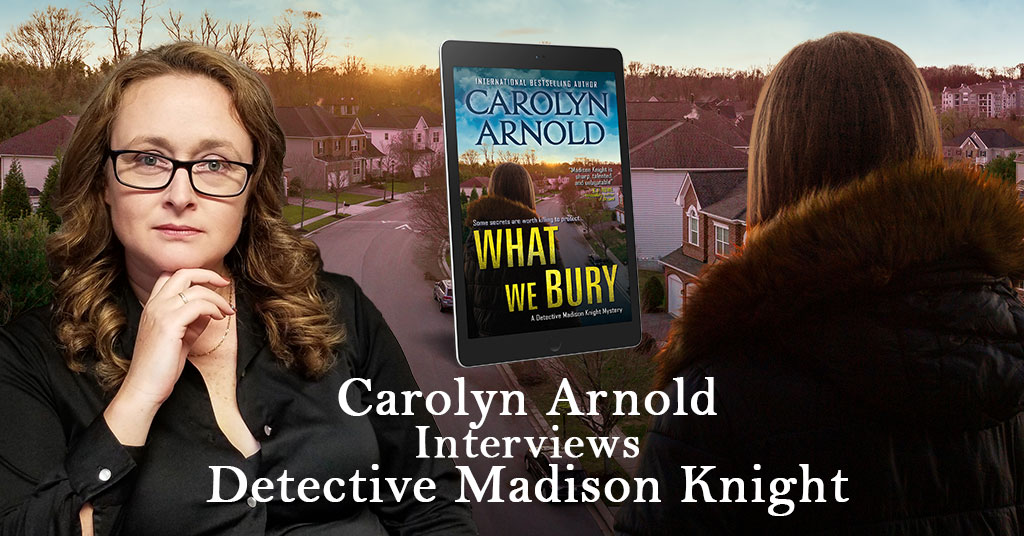 So without any delay, the black text is me and red is Madison.

Madison, I need you to cooperate with me for one minute. Okay?

Guess I keep you busy, but people are curious about you, what makes you tick and—

What makes me tick? Really? You know I’m not a huge fan of cliches.

Yeah, I guess I do. Something to do with your mother.

Okay. Let’s get on with this then.

So you’re a detective?

Yes, in Major Crimes with the Stiles Police Department.

You can investigate kidnappings, but you’re primarily assigned murder cases. What made you want to be a detective?

My grandfather was gunned down while celebrating his retirement from the police force when out to dinner with my grandmother. Due to this I never met him. At least the killer was apprehended and sent to prison, but it was his father he sought retaliation for. My grandfather had sent the shooter’s dad to prison due to his working for the Russian Mafia. I had a new enemy from the moment I heard the story—the mob—and I had finding justice became my purpose in life.

What is your greatest secret during this investigation?

It has to do with the blasted mob. They need to get out of my city. Better yet, cease to exist all together—except for behind bars. As I said, they are my enemy and they’ve ensnared and corrupted fellow Stiles PD officers. I’m determined to expose them as well. After all, they don’t deserve the badge, and I consider it my duty to clean up my city. But in doing so…well, I do my best to keep this side mission, which I’ve taken up with quite the fervor recently, from the man I love, Troy. He also happens to be with Stiles PD and is a SWAT team leader. He can handle himself, but I just want to protect him, I guess you could say.

So that’s how you justify keeping your little “side mission” from Troy?

Guess that’s all you’re going to say on that subject… What scares you the most?

Never thought I’d say this but losing the man I love. That and having any harm coming to him or my family or friends.

What was your biggest challenge during the investigation in What We Bury?

There is some trouble on the homefront… Not just because I’m sort of living a secret life. I was positive that Troy was going to propose to me a few weeks ago, but he never did, and nothing’s been said about marriage since. I’m starting to question our relationship and my ability to read people.

I’m surprised that given all that goes on, you chose the status of your relationship with Troy as the biggest challenge…

He means a lot to me. So does my best friend Cynthia, which brings up another challenge thrown at me. She recently married another detective with Stiles PD Major Crimes, but the man who stood up for him at the wedding is a corrupt cop. He has to go, and I need to expose him, but how do I do that without hurting Cyn? It gets a little ugly…

I’m sure it does… So what would you say is your greatest weakness?

I guess it would depend who you ask. Terry would say it’s my black-and-white approach. People who can’t handle a strong woman would say my tenacity is my greatest weakness. Personally, I’d say that’s one of my greatest strengths. As for weakness, I would say that I care too much. It makes me vulnerable and I hate being hurt.

I can see that. All right, how about some fun questions… If you were starving and needed to eat something what would you reach for?

Do you need to ask? A Hershey’s chocolate bar!

What’s your favorite takeout or delivery? I know you love Greek food and pizza…

Picking a favorite among Greek food, Chinese food, or pizza… I can’t do it.

If a person were to send you a bouquet, what flower would you want it to include?

I’m not really a romantic…or at least that’s what I’m telling you. Ahem. But I’ve recently come to discover a new “flower.”

This comes about during your investigation in What We Bury?

What’s chocolate in a vase with a red bow?

A bouquet of Hershey’s bars?

You’ll have to read the “investigation file” to find out.

But this mysterious bouquet, it came from Troy?

I know you’re busy—as we’ve established, but just a few quick questions before I let you be. What can you tell us about your investigation in What We Bury?

I got a call from my real estate agent when she was preparing for an open house. She found a body in the shed on the property. I get there and it turns out it was a woman who had been stabbed. There’s no ID, no phone, no purse, and no sign of the murder weapon. But the letters GB are written in blood. I need to find out what they mean, if anything, and who the woman was and who could have killed her.

Yep. And, of course, I take on even more.

The Mafia and corrupt cops?

Uh-huh. And then you throw a couple things at me about midway through! What was that about? And then at the end… (Deep breath) Let’s just say what happened has changed my life forever.

Sometimes things are outside of my control, Madison… And I’m sorry, but I promise you’ll grow and become even strong emotionally. Our life experiences make us who we are.

Not sure I want to get all touchy-feely. You said you had a few questions… So two more?

Yeah. Uh, now that you finished the investigation in What We Bury, what do you think is next?

I’m sure it’s another murder—and there’s still more work to be done to clean up Stiles. Will I ever finish?

If I told you, that would be a spoiler.

Hardy-har, as Terry would say.

Very true… And if we wanted to read more about your investigation, where would we go?

What We Bury is available from popular retailers.

Right. I’ll make sure to include those at the end of this interview.

This is the end—right? I mean you said a few questions and that usually means three…

Fine, I give up. (Smile) Thank you for your time, Madison.

If you’re interested in reading What We Bury, it’s available in ebook, paperback, hardcover, and large print edition.