Download Your #Free Copy of CITY OF GOLD #LimitedTimeOffer 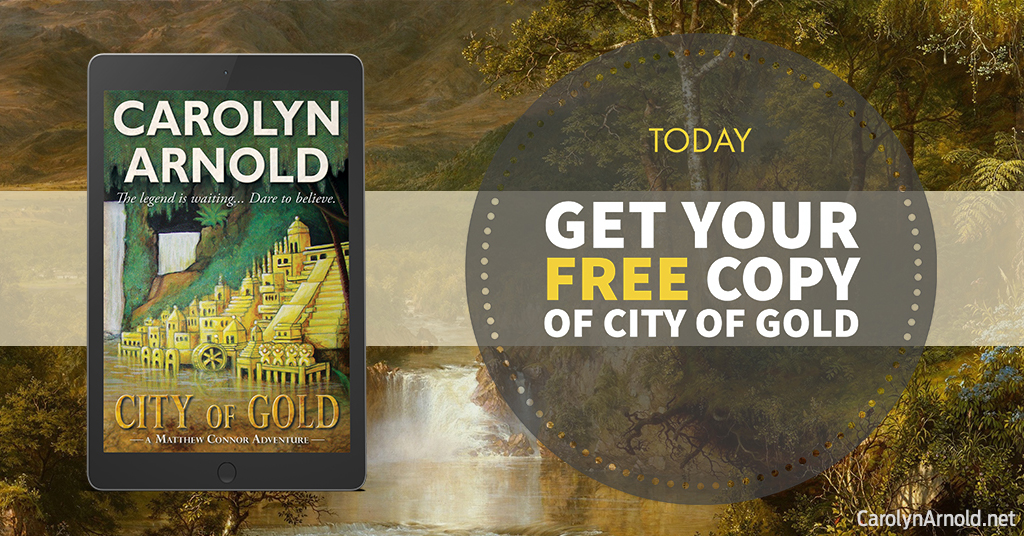 Dare to Believe in Legends

“This book has everything: a kidnapping, murder, a police investigation, and the hunt for lost treasure. A real page-turner full of thrills and emotion with excellent descriptive writing and characters that jump out of the pages and come to life.”
–Beck Valley Books

Many people have died trying to find the Incas’ lost City of Gold. For a long time, it was believed to be a real city that was filled with treasure beyond imagining. It’s fabled to even have streets made of gold. But over the centuries, it has been relegated to nothing more than fantasy and myth.

When the seed was planted in my mind that I wanted to try my hand at an action adventure, the possibility that something like the City of Gold truly existed toyed with my imagination and got me writing about it. The research I conducted was intensive, and the more I learned, the more intrigued I was. There are so many different takes on the legend, and just like the telephone game most of us played as kids, the stories about the City of Gold changed slightly each time it was told.

But the varying stories presented a challenge, as did my background in mostly writing mysteries. After all, they are grounded in the real world and governed by police procedure and science—the complete opposite of myths and legends. So when it came to writing about the Incas’ lost City of Gold, I felt like I needed to find it and make it real in order to write about it! In fact, I had said numerous times that if I had the money to fund an expedition, I’d set out in search of the City of Gold myself!

After completing my research, I developed a theory of where the city might be. And with so many people throughout history talking about it, surely there had to be some truth to their words. Then again, the treasure could have long since been found and taken and distributed elsewhere. Who can know for sure?

Ah, but therein lies the fun. The prospect that the Inca’s City of Gold may be out there waiting to be discovered has endless possibilities! And whether it is or not, writing this book reminded me of a valuable lesson: there is nothing wrong with believing. In fact, I dare you to believe. I dare you to sink into the world of possibilities…

FREE for a limited time in e-book!!!

About the Matthew Connor Adventure series:

Action-adventure books for the mystery lover. Does treasure hunting excite you? What about the thought of traveling the globe and exploring remote regions to uncover legends that the world has all but forgotten? If so, strap yourself in for an adventure with modern-day archaeologist Matthew Connor and his two closest friends. Indiana Jones meets the twenty-first century.

This is the perfect book series for fans of Indiana Jones, Lara Croft, National Treasure, and The Relic Hunter.