For better or worse, Matthew Connor will always be his father’s son… An #excerpt from THE SECRET OF THE LOST PHARAOH 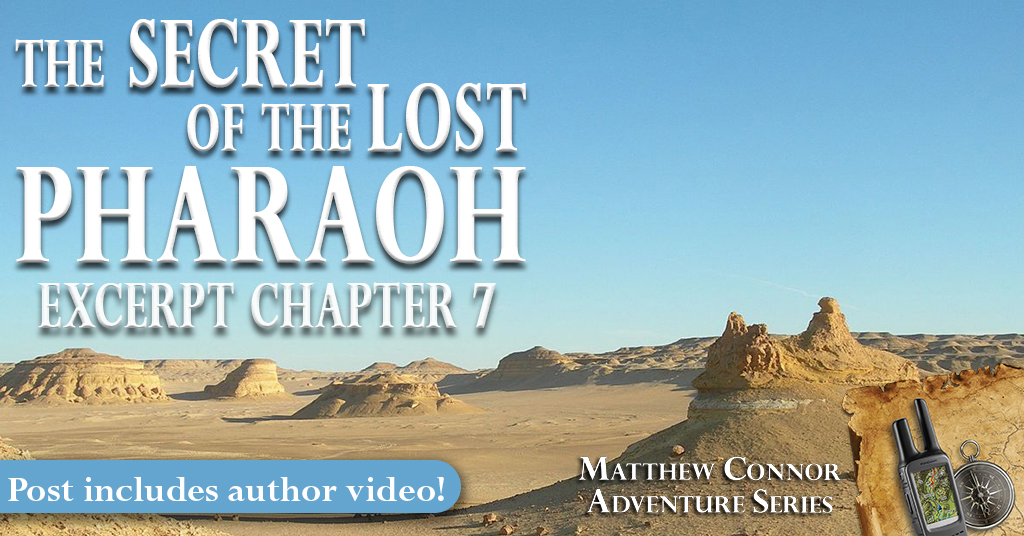 “One of the things I loved about The Secret of the Lost Pharaoh is that Arnold does not depict Egyptians as backward people on camels as most “Mummy” and Hollywood movies do. The book is set in modern day Egypt, after 2011.”
–Nadaness In Motion

Saying that family relationships are complicated is putting it mildly. I know this from personal experience. Based on stories I’ve heard over the years, I’m not alone in feeling this way. Often the source of conflict is because the children grow up and don’t want to live the way their parents want. Sometimes it’s the other way around. I just really don’t think there are any families in existence that resemble the idealism presented on Leave it to Beaver.

Taking this into consideration, it only makes sense to include family drama in my books. I’ve had that be the case with Detective Madison Knight and her mother for years now. When I wrote City of Gold, it soon became evident that there was a rift between Matthew Connor and his father, dating back to the death of Matthew’s mother. Tensions ran high for father and son.

While some of their differences were worked out, some remain. Maybe that’s because Matthew’s thirty and still living under his father’s roof; maybe it’s more complex than that. After all, it’s not like they are tripping over each other when they share 26,000 square feet and mostly stick to separate wings of the house…

But in an effort to repair and rebuild his relationship with his father, Matthew feels the desire keep his father informed of his plans. Not for his father’s approval. Rather just to keep him in the loop. Something that should be relatively easy and nonconfrontational… Or one would think anyway.

Find out how it goes for Matthew by reading the following excerpt from Chapter 7 of The Secret of the Lost Pharaoh.

“So you’re going on an archaeological dig in Egypt?” There was only one reason his father would state the obvious as a question like that. He was mining for information. And under his father’s watchful—and judgmental—eye, slivers of self-condemnation pricked at his conscience. But sharing more wasn’t a matter of choice; it was a matter of protecting his father.

“What specifically has you going back there?” His father stopped tapping his glasses. “And tell me the truth.”

This was the only thing about keeping his father in the loop: it made him feel like a child explaining his comings and goings.

“A pharaoh’s tomb.” Not fully forthcoming, but it was short, sweet, and honest.

“Uh-huh. I guess we’re back to half-truths.” His father looked toward the door as if encouraging Matthew to use it.

“I’m telling you the truth,” Matthew started, earning his father’s gaze again. “But yes, there is more to it.”

Matthew pulled his shoulders back. “I can’t tell you.”

“Then why come in here at all?” he asked hotly, his frustration seeping through. “You’re an adult. You don’t have to explain yourself to me.”

“I realize that, but I just thought you might notice if I wasn’t around for the next month. I didn’t want you to worry, but—” Matthew got to his feet.

“Sit down.” His father’s stern directive had Matthew sitting again despite not wanting to. It was no wonder the man was successful in business and politics. His father’s posture relaxed, if only slightly. “Tell me what you can.”

So much for not needing to explain myself…

“I’ve told you everything I can.”

“Ah.” His father studied him, and it was probably his skill at drawing out the truth that had been the real reason Matthew had avoided him in the past.

“Some of this expedition is confidential,” Matthew said.

“But it’s not dangerous.” His father managed to phrase this as more of a stipulation than an inquiry.

How did his father expect him to answer? Surely, he knew that unearthing legends was a dangerous business. Though, it was even more so when it involved the Emerald Tablets…

“Keeping quiet on that point, I see.” His father stuffed a bookmark into his book and put it on the side table. “That means it is. But you mentioned a pharaoh’s tomb. That doesn’t sound too risky.” His father was nothing if not relentless.

“We’re still talking about the desert here, and there are—”

“Risks involved with that alone,” his father finished. “Are you being pressured into this?”

Sophie’s kidnapping came to Matthew’s mind. “Like with the City of Gold?”

“No. I’m going completely of my own free will,” Matthew promised.

Readers will need to hold on to their hats for this follow-up to City of Gold, which reviewers described as “a fast-paced action adventure” that is “akin to an Indiana Jones story set in modern times.” Now, the second in the series promises to bring much of the same excitement! Join archaeologist and adventurer Matthew Connor and his friends as they go after the Emerald Tablets to save the world in The Secret of the Lost Pharaoh.

Archaeologist and adventurer Matthew Connor has made a career of finding legends the world has all but forgotten. Though there’s one in particular that has fascinated him for years—the Emerald Tablets. Myth says that they possess the knowledge of the universe, allowing humankind to traverse Heaven and Earth, and have the power to bestow wealth and wisdom upon whoever possesses them. But if they fall into evil hands, it could cause a global disaster.