Give Your Ears a Thrill This Christmas – Justified is Now in Audiobook! 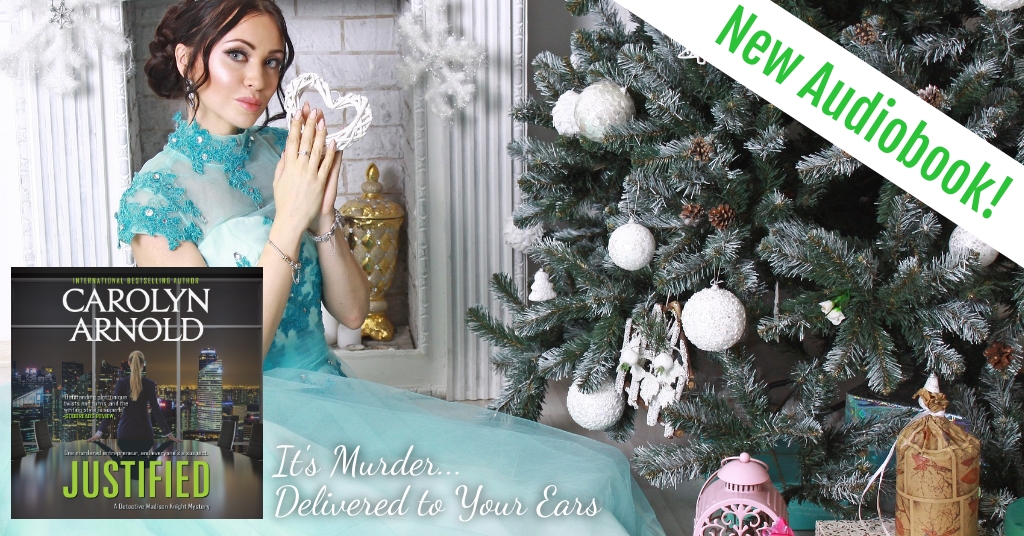 Today’s post is a spotlight on one of December’s featured books: Justified, the second book in the Detective Madison Knight series. You can listen to a sampling from the new audiobook below, taken from Chapter 5, or read it by scrolling down. Enjoy!

Listen to an excerpt from Chapter 5 of Justified (Detective Madison Knight series) narrated by Samantha Novak:

Madison’s eyes felt like they had been welded shut by the sandman. She heard a faint banging, which at first, she dismissed as a dream, but unfortunately it was persistent.

What time was it anyhow? She managed to read the clock through foggy slits. 7:02.

The knocking intensified. Her visitor wasn’t going to leave. Her initial reaction was to throw something hard at the wall and protest the awakening, but she didn’t have enough energy for that.

“What?” she yelled, certain her neighbors would pound on the wall to protest the noise, but not really caring if they did. The walls were paper-thin in this place, and usually it didn’t take much for them to get excited, but this morning their apartment seemed quiet. Maybe they had drunk their Christmas cheer and passed out, unconscious to the world. Or maybe they had taken her last warning seriously when at one in the morning she had donned a housecoat, fuzzy slippers, and her Glock and paid them a visit. Not necessarily something a good cop would be proud of, but she was just human after all.

Her visitor wasn’t letting up.

“I’m coming. Shut up!” She couldn’t help it. Patience was never her strong suit, and at this point, on a limited amount of sleep, she had even less of it.

She swung the door open and faced Terry. He had a couple cloth grocery bags in one hand and a small, decorated tree under his other arm.

“What are you doing—”

She looked down at herself and was thankful for full coverage—a pair of blue track pants and a Stiles PD sweatshirt.

“And here I would have taken you for a white lace woman.”

“As if.” She stepped back from the door to let him in.

“You don’t have one, do you?” He glanced around the apartment.

“Didn’t think so.” He met eyes with her and smiled. “A tree, Maddy. Everyone needs one.” Click the links below to buy Justified in the format you prefer.

One murdered entrepreneur, and everyone’s a suspect.

Detective Madison Knight should have ignored her phone when it rang on Christmas Eve. Now she is spending the holiday dealing with her least favorite thing: a bloody murder scene.

The victim, Claire Reeves, was a successful entrepreneur and had it all—sex appeal, intelligence, and money—but it seems that one of those things may have caught up with her. Now, Madison and her partner are digging through the victim’s personal life, but the more they dig, the more people they find who had motive to kill her. It’s certainly a case of too many suspects, too little time, but Madison is determined to find Claire’s killer and make sure justice is served.

Justified is a fast-paced crime novel with twists and turns you’ll never see coming. Perfect for fans of the police procedural genre. Uncover clues, follow leads, and catch a killer like thousands of readers have done before you. Buy this international bestselling book today and join the investigation!