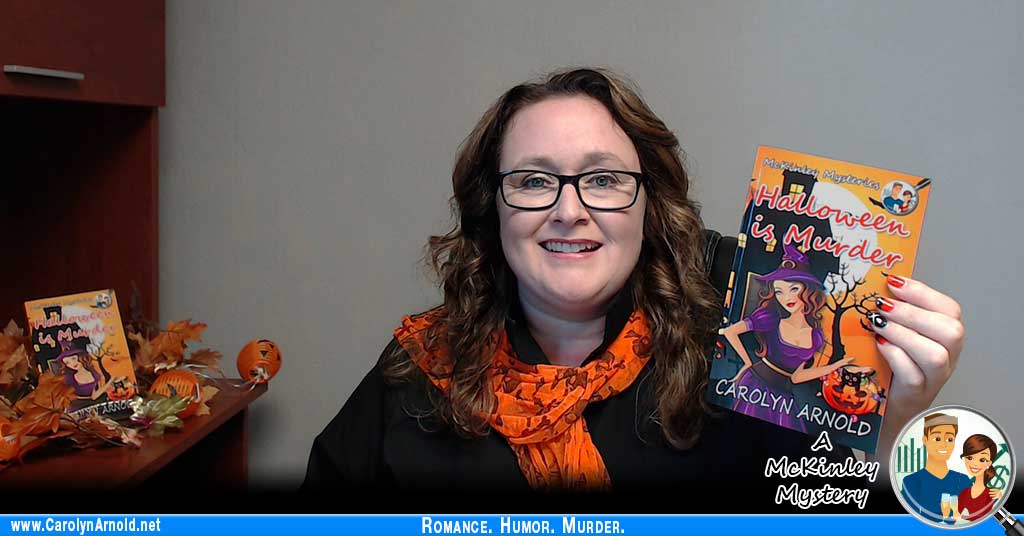 Sean and Sara McKinley are excited for their haunted house fund-raiser to be aired on a local television station, but they are in for a surprise when they sit down to watch their segment. Read the following excerpt and find out what.

Excerpt from chapter 2 of Halloween is Murder (McKinley Mysteries)

IT WAS NEARING SIX O’CLOCK in the evening, and Sean and Sara were home in their media room on a large sectional couch, getting ready to watch their spotlight on the evening news with some friends and colleagues. They’d left the haunted house in the hands of some capable employees, who would be posted there until closing at eight.

Jimmy Voigt, their former sergeant when they worked for the Albany PD, also worked for them at the PI firm. He was on the couch next to his girlfriend, Meredith, for the viewing. Sara had told Sean more than once that it was a match made in heaven. He was pretty sure he’d rolled his eyes every time. Not because he didn’t believe in love—he was married to his soul mate—but he just found it hard to picture his former boss whispering sweet nothings to a lady love.

Helen was seated at the other end of the sectional, and Mia was on the floor at her feet, still dressed up as a princess. She really was a good kid—as far as kids went anyway. And it’s not that Sean had anything against children, but for now, he and Sara had decided they weren’t going to have any. And honestly, it was probably for the best, as they traveled a lot and solving crimes didn’t leave much free time.

“I’m going to be on TV.” Mia’s face lit up as she grinned. “I can’t wait!” She seemed more excited about this than she had been at the announcement that pizza was for dinner. Mia stared at the muted television. “That lady was so pretty.”

By “that lady,” Sean assumed she meant Chloe Parsons. Sean had to agree that based on appearances and initial impressions, she was good-looking. But he didn’t understand why she took such issue with Susannah when she didn’t want to talk.

Mia turned to Sara and flashed another smile. “You looked great, too.”

“Thank you.” Sara returned the smile and swept her long brown hair over her left shoulder. “Did you have fun today?”

“Oh yeah. My favorite part was the mummy.”

“That didn’t scare you?” Sara laced her voice with concern but couldn’t hide the underlying amusement.

Mia’s expression faded, and her eyes enlarged. She nodded. “I was, but I like to be scared. And I love mummies!” She bounded to her feet and jumped onto her mother’s lap. Helen let out a whoosh of air but quickly recovered.

“It’s the other kind of mummy, though, sweetheart.” Helen ran a hand over her daughter’s silky hair.

Sean looked at the digital clock on the cable box: 5:59.

Sean turned up the sound and sank back into the couch, putting an arm around his wife.

Mia wriggled on her mother’s lap.

“Come on, honey, back on the floor.” Helen’s voice strained with the desperation of her plea.

Sean smiled, not because of the woman’s discomfort but because he loved seeing how excited Mia was.

“My costume was the best. They have to show me!” The little girl’s eyes were wide and fixed on the screen.

“You are a beautiful little princess,” Sean said.

Mia glared at him. “I’m not little.” She held up both hands, fingers splaying as she counted them off. “I’m six.”

“My apologies,” he said with a slight bow of his head.

Sara laced her fingers with his, and he met her gaze, which said, You’re aren’t the best with kids…

“Shh.” This came from Jimmy, and when Sean turned to look at him, he shrugged. “You want to hear it, don’t you?”

“We have some somber news this evening,” a chic reporter announced from the news desk. Based on the set of her mouth and the sad look in her eyes, she wasn’t reading from a script. “Your Source has just received word that one of our own has died.”

Sara tapped her fingers on the back of his, leaned in, and whispered, “I have a bad feeling about this.”

He didn’t look over at her, but his wife had this way of sensing things. He wouldn’t label her clairvoyant, but she certainly had strong intuition.

“Tonight, we say good-bye to”—the reporter, while she kept her tone modulated, was clearly battling with her emotions—“Chloe Parsons.”

The news was a sledgehammer to his chest, knocking the wind out of him. 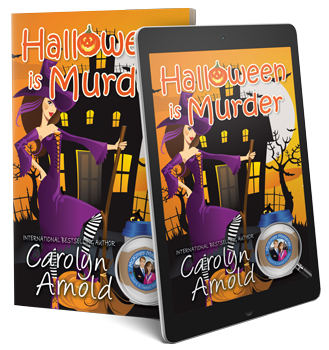 Beware of all that goes bump in the night…

Sean and Sara McKinley are excited about the haunted house they’ve set up as a Halloween charity fund-raiser, but things take a ghoulish turn when the reporter covering their story is found dead. With the media keeping mum about how she died, Sara’s curiosity is piqued, and she convinces Sean to take on the investigation through their PI firm.

But this case is not without its challenges. The police are actively investigating it, as well, and it’s not even clear that the woman was murdered. It will take a little cloak-and-dagger, dress-up, and finesse for the McKinleys to get to the bottom of it, but they aren’t the kind to give up.

As they troll for leads and work through the skeletons in the reporter’s closet, they unearth a few suspects, but they’ll need to carve out the whole truth if they’re going to find her killer. If they do so fast enough, there might even be time for a little trick-or-treating.

You can buy Halloween is Murder wherever books are sold, including the following popular retailers:

To find out more about Halloween is Murder and the other installments in the McKinley Mysteries series, including box sets, visit CarolynArnold.net/Mckinley-Mysteries.