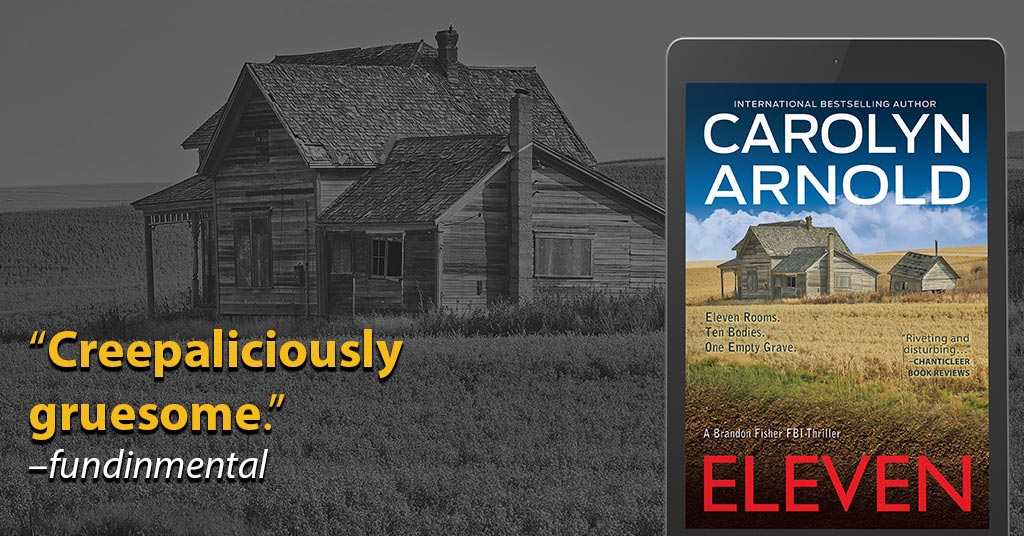 “Looking for an FBI thriller? This is it! … You just want to don a badge and gun and delve in there yourself… The characters are real, honest, and gritty, and the ‘baddies’ get under your skin, willing you to unravel their psyche. I love a good thriller, and this did not disappoint.”
–The Kindle Review

Have you ever driven past a run-down and abandoned house and wondered about its history? Who had lived there, and what had happened to lead to its neglect? I must say that I do that quite often, but it was one place in particular that led my imagination down a dark path.

The building is on the outskirts of the city where I live and there are fields all around it. I don’t know what exactly about it led my thoughts to where they went, but my mind was buzzing with a what if. I envisioned underground burial chambers beneath the house…

Yes, I realize you probably don’t think this way, but what can I say? I am a crime author. I see murder and bodies even where there are none. Often when I take walks or go out in nature beauty eventually morphs into “what if I found a body here.” Yeah, I know. Maybe I need help. Maybe it’s a gift. Seeing as my crazy mind has brought us together, it can’t be a bad thing. 🙂

Anyway, it was these dark thoughts that inspired me to write my FBI thriller Eleven. And I must say that this book was a scary one to write! Heck, it was scary to plot out in my head. But it was the vivid nightmares that came during this time that kept me sleeping with one eye open! In fact, I wasn’t even going to write anymore books in this series. Eleven was planned to be a standalone, but due to popular demand—both from my readers and my characters, I had to write more.

In Eleven, Brandon takes on his first case as an agent with the FBI’s Behavioral Analysis Unit. He quickly finds out just how depraved serial killers can be. Eleven rooms, ten bodies, and one empty grave. Yeah, I’d shy away from that! And that’s not even getting into the ritualistic torture and murder method aspects. Let’s just say that I’m happy I can distinguish the difference between fiction and reality. Not to say that what I write hasn’t happened or isn’t happening right now… Shivers. :S

If you haven’t read Eleven yet, I encourage you download this book as my gift to you. If you have read it, I hope that it had you biting your nails! (Bad habit, really… But what I’m saying is, I hope it had the creep factor for you and kept you turning the pages.)

Click the links below to buy Eleven
in the format you prefer.

⭐⭐⭐⭐⭐ “Eleven is a very fast-paced story with interesting characters. Tension is ratcheted up with every chapter and I think Eleven could be made into a very suspenseful movie.” ~Amazon Reviewer

In this international bestseller, rookie FBI Agent Brandon Fisher takes on his first case with the Behavioral Analysis Unit, but will he survive long enough to catch the killer? Eleven is a fast-paced, spine-tingling thriller that will have you gasping for breath at every twist…

When Brandon Fisher joined the FBI Behavioral Analysis Unit, he knew he’d come up against psychopaths, sociopaths, pathological liars, and more. But when his first case takes him and the team to Salt Lick, Kentucky, to hunt down a ritualistic serial killer, he learns what nightmares are truly made of.

Beneath a residential property, local law enforcement discovered an underground bunker with circular graves that house the remains of ten victims. But that’s not all: there’s an empty eleventh grave, just waiting for a corpse. The killing clearly hasn’t come to an end yet, and with the property owner already behind bars, Brandon is certain there’s an apprentice who roams free.

As the FBI follows the evidence across the United States, Brandon starts to struggle with the deranged nature of his job description. And if the case itself isn’t going to be enough to push Brandon over the edge, he’s working in the shadow of Supervisory Special Agent Jack Harper, who expects nothing short of perfection from his team. To make matters even worse, it seems Brandon has become the target of a psychotic serial killer who wants to make him—or his wife—victim number eleven.

Join the hundreds of thousands of readers who have already taken the plunge into a series that will take you into the minds of the most heinous and disturbing serial killers the world could ever imagine. Buy this international bestselling book today and hunt a serial killer alongside the FBI!