Need a break from Hallmark movies? #Preorder ON THE COUNT OF THREE 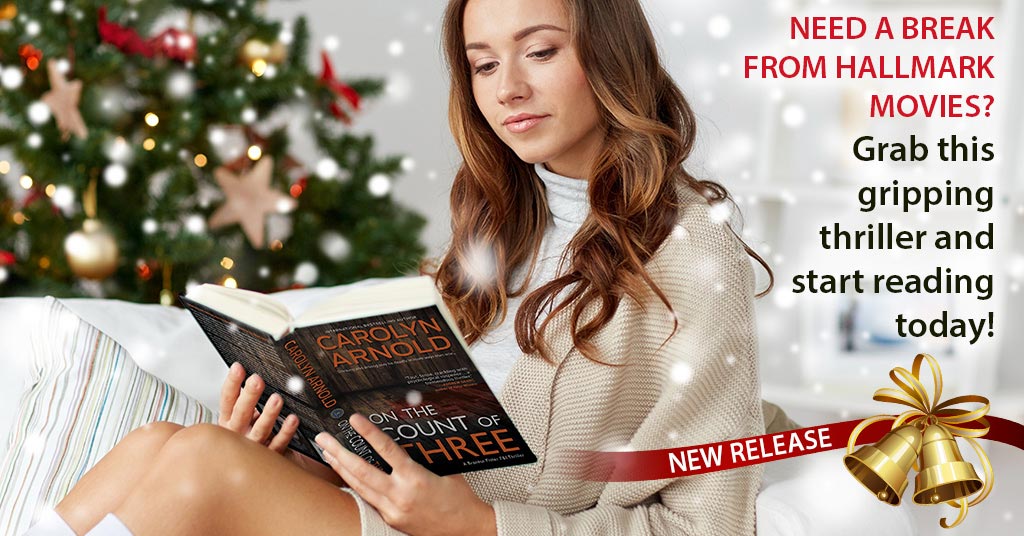 Oh, this time of year is magical, and it seems everyone has caught “the bug” early! Usually it’s me rushing headlong into winter and Christmas, but this year I didn’t want to release summer. I have finally let it out of my clutches, though, and come to accept that it’s over and there’s only going forward. The tree is up and so are the decorations. I’ve already watched—and thoroughly enjoyed—some Christmas movies too!

It is possible to have too much good cheer, though. Sometimes you just need a little murder and mayhem. That’s where I come in! 😀 (Insert evil grin here.)

Have you pre-ordered my latest FBI thriller, On the Count of Three? It’s the book of the season if you love serial-killer fiction! For Brandon Fisher fans, you’ll want to grab this gripping thriller right away! Readers not only investigate alongside the FBI, but they also get inside the mind of a serial killer!

“Taut, tense, crackling with psychological suspense and bursting with authentic detail, On the Count of Three is a tremendous thriller. Fans of Criminal Minds will love it and be left hungry for more.”
–Andrew Grant, author of False Witness

About On the Count of Three:

Drinking and driving may be deadly in more ways than one…

When a woman’s disappearance ticks off all the same boxes as two unsolved murders, Miami homicide detective Kelly Marsh is convinced there’s about to be a third. If she’s right and the killer sticks to their previous MO, she only has three days before Jenna Kelter’s decapitated head will show up somewhere in the city. With no time to waste, Kelly reaches out to the one person she knows can help: her former mentor and family friend Jack Harper, who just happens to lead a team with the FBI’s Behavioral Analysis Unit.

BAU special agent and profiler Brandon Fisher easily sees the similarities between Detective Marsh’s missing person case and the two cold cases: all three victims served time for DUI vehicular homicide and disappeared three days after being released from prison. But is that enough to assume Kelter has been abducted by a serial killer? Brandon’s not so sure and fears his boss may have let his personal connection to Marsh cloud his judgment. Surely there isn’t any other explanation for why they jumped into an investigation less than twenty-four hours after Kelter was reported missing. Then again, maybe Brandon is letting his own differences with the detective affect his perspective. He’ll need to move past it, though—and quickly.

After all, this killer has evaded capture for the past six years, and they may be looking at a lot more victims than originally suspected. This serial killer is calling the shots and pulling them into a macabre game of cat and mouse. While the team has no choice but to play, if they don’t make the right moves, one of them may not make it out of Miami alive.

On the Count of Three is a creepy psychological thriller that will have readers turning the pages to unravel every twist. Buy this international bestselling book today and hunt a serial killer alongside the FBI!