NEW RELEASE: The hunt for a serial killer starts today! On the Count of Three by Carolyn Arnold is now live! 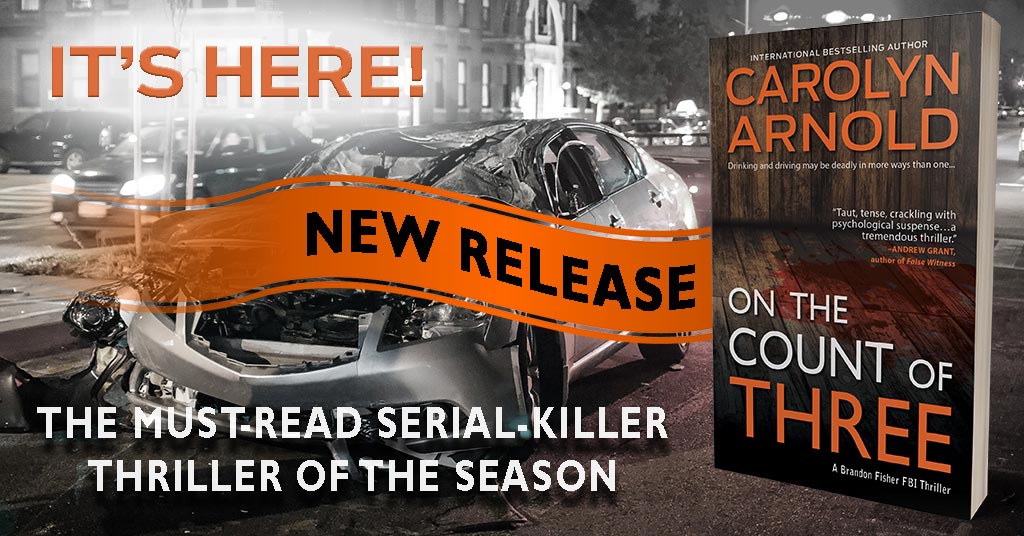 “Taut, tense, crackling with psychological suspense and bursting with authentic detail, On the Count of Three is a tremendous thriller. Fans of Criminal Minds will love it and be left hungry for more.” –Andrew Grant, author of False Witness

On the Count of Three is the perfect book for fans of JT Ellison, Catherine Coulter, Allison Brennan, and Blake Pierce. Buy this international bestselling book today and hunt a serial killer alongside the FBI!

When I set out to write the killer for On the Count of Three, I met one who gave me absolute shivers. The first chapter is shocking and appalling and will leave readers taking pause before they continue—but I feel they will continue. They’ll be drawn in the same way we are all curious of a car crash, and they’ll want the killer found.

This book takes readers alongside the FBI team to Miami, Florida. What could be viewed simply as missing person case explodes into a hunt for a serial killer. It’s all because a local detective has connected the dots between the recent missing person case and two previous murders. What follows is a little bit of jurisdictional headbutting between the detective and FBI agent Brandon Fisher, but they’re going to need to put their personal differences aside if they are going to have any chance of saving the missing person.

I invite you to download a copy of On the Count of Three or order in paperback or hardcover from your favorite retailer. But be warned: this book isn’t for the faint of heart. Read on for a snapshot taken from the Prologue.

“Op-Ed columnist Pamela Moore passed away today after a violent home invasion left her for dead. Pamela was…”

The reporter droned on, sensationalizing Pamela’s redeemable qualities while shoving all her faults, misgivings, and mistakes into a closet of obscurity. But it was a fine representation of Pamela’s real life: she had spun perspectives to make a headline. More than that, she had been so obtuse that she had painted his family as idyllic.

His heart was thumping in his ears, his mind replaying the reporter’s words: left her for dead.

As if he’d done that on purpose. He clenched his fists and focused on his breathing, on slowing his heart rate. Sometimes he wondered why he put himself through watching the video over and over. The incident had taken place just over three years ago.

Still, he settled into his chair to journey back in time. To listen to what the newspeople had said about his victim, her masked assailant, and what had looked like a home invasion gone horribly wrong. It reminded him of what he’d done right and where he’d failed.

Pamela’s fiancé came on the screen. He was the picture of calm put-togetherness in his pressed suit, standing in front of the camera with a microphone to his lips. He, too, was singing her praises and calling for justice.

But poor Pamela. There would be no justice for her. Her case was as cold now as her body in the ground.

He focused on the TV again and listened.

“Sadly, police have no suspects at this time but say the man who did this is considered to be especially dangerous. They don’t believe that robbery was the motive, and they warn women to remain vigilant.”

Her confirmed death and the reporter calling him especially dangerous were takeaways he rather enjoyed. He leaned forward, a smile playing on his lips as he stopped the recording and rewound the VHS tape. He was determined to dwell on the good that came with the botched murder of Pamela. He’d learned from his mistakes and his second murder had gone much better. While they say practice makes perfect, he didn’t greedily indulge. No, he only took out those he deemed worthy of his attention. It was enough to quiet the darkness inside him. But there were times that the burning need to take a life was all-consuming. He called that side of him the Night.

It was an authentic part of himself, having lingered in the background for some time, calling out to him, taunting him to listen to its petitions. And now, as a man of thirty-seven, he was no longer afraid or leery of this facet of himself. He entertained the blood-filled fantasies of the Night when it was prudent, and no more would he be robbed of the fulfillment that came with taking someone’s last breath. His preferred killing method assured that now.

The VCR whined down to a thunk. He got up from his recliner and ejected the tape. He returned it to its cardboard sleeve and put it back under a floorboard near the TV set. It was safe there.

He laced up his boots and headed out to the shed—where he was holding his latest victim. The Night purred within him, yearning to be satisfied. His heartbeat pulsed beneath his skin, anticipating what was to come.

Download On the Count of Three from popular retailers.