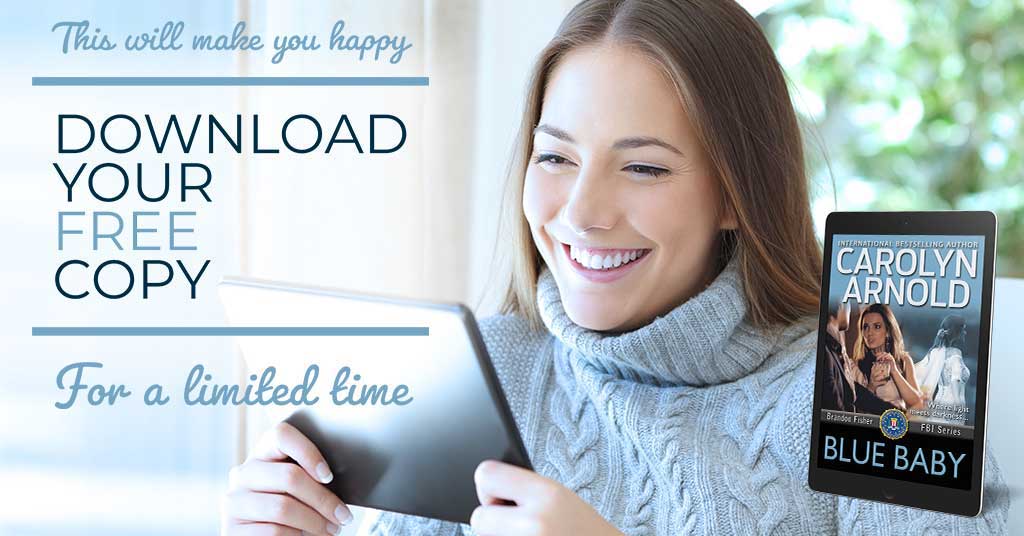 At the heart of every human being is the need—and the desire—to be happy. What if I told you a killer is preying on this very fact? And while many find happiness to be an elusive pursuit, this killer views it as something to be created.

They set out on a mission, seemingly targeting wishful brides-to-be, who hinge their happiness on their relationships. And by murdering them, the killer believes their actions are motivated out of love. After all, the women longed to happy, and as the killer sees it, they gave them that gift.

But seeing as you’re on my site, this thriller probably sounds right up your alley. Described by a reviewer as “one hellish, fast-paced, creep show” (Tammy’s Tea Time), Blue Baby will take you into the darkness and have you reexamining your perspective on happiness. Is it something that comes from within or do you look for external validation?

I’m sure you’re already hooked but guess what? From now until March 16th, you can download the e-book version of Blue Baby at no charge from your favorite e-retailer. (Scroll down for retailer links.)

Your friend in light and darkness,

FBI agent and profiler Brandon Fisher and the team are called to Grand Forks, North Dakota when a murder follows the same MO as that of a killer one year prior. This killer seems to be targeting wishful brides-to-be, and what the team uncovers will have you looking at the quest for happiness a little differently. They say happiness can be elusive, but in this case, it’s deadly.

Get your creep on…

Read the Prologue of Blue Baby

THE WHITE SILK WAS DRAPED over the porcelain of the tub like angel wings. She was beautiful, radiant. Her face was flushed, and her eyes were open and staring at him.

He took the set of fake lashes from his pocket and applied them. He coated her eyeball with glue before delicately using both hands to pull her eyes closed. The extensions fanned against her flesh.

He applied the eye shadow and stepped back to appreciate the hues of brown and gold.

He smeared the tube across her lips. The bright red was an exquisite touch of color against her fair skin. He put the veil in place and wisped back the nylon until it framed her face and ensconced her shoulders. He stood back to admire his work thus far.

The blonde sat with her back against the end of the tub, her dress spilling down her frame and over the ledge. Her hair was a bed of curls beneath her veil. Her makeup appeared professional, and he was pleased with his hard work. He wasn’t nearly as perfect with the first one.

Her mouth carried a hint of peace. Of happiness.

The Big Event was under way.

His gaze went to her left hand resting in her lap.

How could he have been so foolish? Was he rushing things? He moved swiftly through her apartment and found what he sought on her dresser.

“There you go, beautiful.” He slipped the wedding ring on her finger, leaving him with one final task.

He took the cigar cutter from his pocket, slipped her ring finger into it, and squeezed. As he had the first time, he marveled at the ease of it, how such small blades were able to cut through bone. He let the severed finger fall against her ivory dress.

Stepping back, he took in her beauty.

She was pleased. It was in the way her lips were set.

He smiled. “Now, you can just be happy.”