Read an Exclusive #Excerpt of PAST DEEDS, #bestselling FBI #Thriller 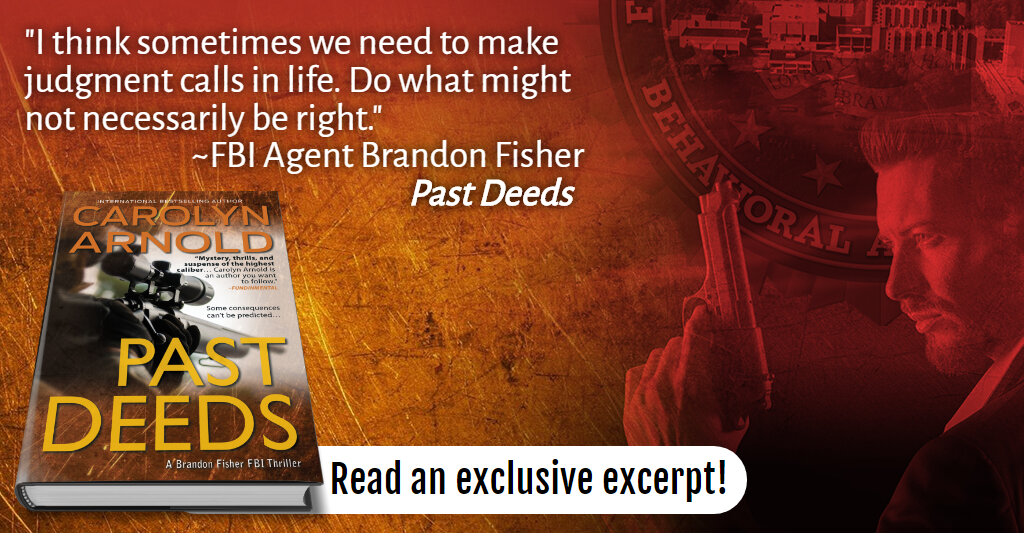 Past Deeds has a bit of a different feel from previous books in my Brandon Fisher FBI series, but it’s being well received. Readers still have themselves a serial killer to hunt with the FBI, but it takes on a more psychological feel than being focused on the gruesome acts often portrayed in previous books of this series. But I felt it was time to shake things up a little. In fact, not just with the plot but I might have made things a little more complicated for the characters. If you’ve already read On the Count of Three, you’ll have a hint as to what I’m talking about. If not, well, maybe start there—but you don’t have to.

One thing with Past Deeds, is you’ll realize how effected the characters are by their past choices and decisions—something we can all relate to in real life. Brandon especially is impacted with the facets of this case and is haunted by his past choices. Really, we all live with some regrets or wishes that we’d done something differently, but the theme of this book goes to show how sometimes we can have no idea how far-reaching the consequences can be to our actions. Anyway, I hope you grab yourself a copy of the book. In the meantime, you can also read an excerpt below.

To catch you up, a defense attorney by the name of Darrell Reid was shot down by a sniper in Arlington, Virginia outside a building called Wilson Place. FBI agents Brandon Fisher and Paige Dawson need to be speak with the person manning the front desk.

Excerpt from Chapter 6 of Past Deeds:

Wilson Place’s lobby smelled like money with its plush carpeting, stiff-looking furniture, and marble waterfall counter. A man in his fifties was standing behind the latter, ignoring the chair that sat off to the side. At the end of the lobby was an elevator with a uniformed officer stationed next to it.

The man at the desk took in Paige and Brandon, his gaze briefly dipping to the FBI acronym on their vests before seeking out Herrera for an explanation.

“Roy Hall, these are FBI agents, Dawson and Fisher.”

Roy’s eyes returned to Brandon’s vest, and he paled.

“Mr. Hall,” Paige started, “we have some questions we’re quite certain you could help us with.”

Roy’s body stiffened, and he put his hands on the counter for support. “I’ll do my best.”

“The man who was shot…” Paige paused, watching for Roy’s reaction, but he was as impassive as stone. “Did you know him?”

Paige didn’t say anything for a few seconds.

Roy went on. “He was a prosecuting attorney, right? His name was Darrell Reid?”

“That’s right.” Paige had the feeling Roy was more familiar with Reid than he was letting on.

Roy was looking in her direction, but more or less through her. “I’ve seen him around,” he volunteered.

“Here? In this building, before today?” she tiptoed but applied some pressure.

“I’m not really at liberty to say.” Roy’s gaze drifted to Brandon again.

“I’m guessing you’ve worked here a long time,” Brandon said, and Paige could appreciate he was trying to establish a comradery with Roy.

“My guess is you haven’t been an agent near as long.”

“That I am, but I can appreciate that you would do anything to protect a job you love.” Brandon’s gaze flicked to her just briefly. “But I think sometimes we need to make judgment calls in life. Do what might not necessarily be right—” he added finger quotes “—but that actually is.”

“I don’t know where you’re going with this, Agent Fisher.”

“I think you do.” After a few seconds, Brandon asked, “You ever see Reid here before?”

Roy’s shoulders sagged as if all his breath had left him, and he slinked across the counter to the chair, where he lowered himself. “I may have.” Roy kept his gaze on the floor.

“Did he come here regularly?” Paige asked in a gentle tone.

He raised his eyes to meet hers. “I’m not going to say.”

Apparently, Brandon’s attempts to loosen Roy’s tongue hadn’t worked. Paige stepped toward Roy with care, so as not to intimidate or startle him. “We understand that Mr. Reid came here last night and left this morning. Do you know what business he had here?”

“I couldn’t tell you even if I knew, but apparently, someone has a big mouth.” Roy’s gaze shot past them to outside.

​Excerpt is subject to copyright protection.

Past Deeds is available in ebook, paperback, hardcover, and large print edition. It will soon be available in audiobook. Read in the format you want from the retailer you prefer. 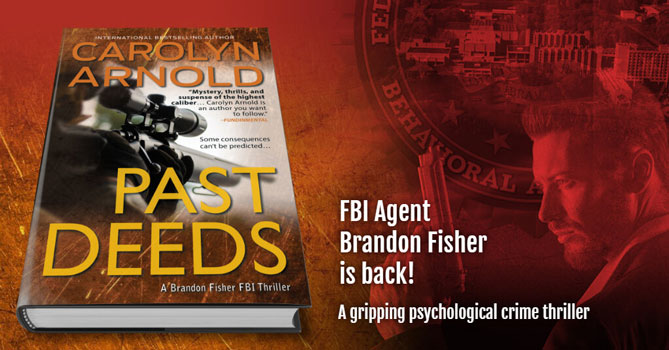