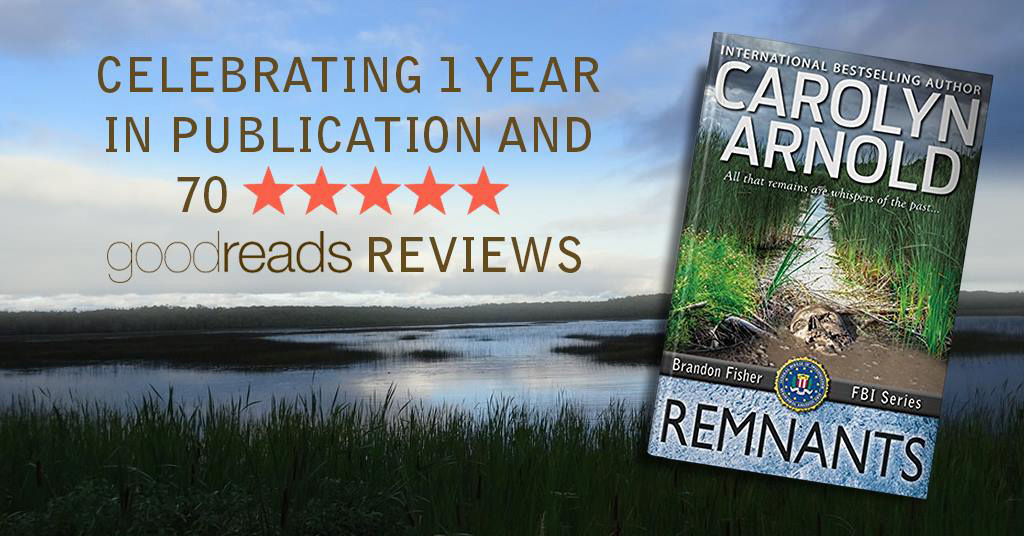 FBI agent and profiler Brandon Fisher caught up with me after closing his most recent case in Savannah, Georgia. While the full story can be found in the book Remnants by Carolyn Arnold, he’s here today to give us a little insight into what everyone can expect from this investigation.

Can you tell us a little about yourself and give us an overview of the investigation in Savannah?

My name is Brandon Fisher, and I’m a special agent with the FBI Behavioral Analysis Unit. I work closely with three other agents: Paige Dawson, Zach Miles, and our boss, Supervisory Special Agent Jack Harper. While I’m just a few months past my two-year probationary period with the team, I must say, each case seems to be more heinous than the last. And our recent investigation was no exception.

As you mentioned, it took us to Savannah, Georgia. We were called in when human body parts surfaced in the Little Ogeechee River and turned out to be from three different victims. To make things even more complicated, there wasn’t a clear MO or victimology that we could determine. We got some leads, though, when a torso painted blue and missing its heart was found.

I wish I could say that was the worst of it, but things just got creepier from there. If only I could unsee some of things I’ve witnessed in my short career as an FBI agent…

Now I’m curious about what you’ve seen! Will you share a little with me?

I can, but only if you have a strong stomach and don’t mind lying awake at night!

Very well, but don’t say I didn’t warn you… I’ve seen decapitations, bodies where victims’ intestines were removed, the death of a man who was dragged behind a truck, victims with severed penises, and then some. And now with the case in Georgia, well, this killer tops them all to date. Victims’ limbs were found, and in most cases, their skins were removed. Man, I’m feeling squeamish thinking about it all again! I can’t even get into what was discovered on the side of the road about halfway through the investigation…

What challenges did you need to overcome to solve this murder—first from a professional standpoint, and then from a personal one?

We had no idea who the victims were—we didn’t even have full bodies—so that was a huge drawback. Eventually we were able to build a profile for the killer’s victimology, but that information didn’t come easily.

From a personal perspective, we were called out to Savannah on Valentine’s Day, so I kind of messed up with the woman I’ve been casually dating. Suffice it to say, I struggled with what I wanted to let define me and how I wanted to move forward with my life for a while there.

Did you ever feel as if your life and those of your teammates were in danger?

Absolutely. Heck, Jack—my boss—almost died during a case we took on last summer. This one in Savannah was his first case back out in the field. Honestly, I wasn’t sure he was ready, despite the fact that he was cleared for duty. As for fearing for my own life, let’s just say I was craving a strong drink by the time the case wrapped.

Do you have any takeaways from this investigation? Any life lessons you learned?

Life is short, and we need to make the most of it—especially when what we want scares us.

Thank you for taking the time to talk with us today, Brandon. It was great to hear a little about the case! Now, where can we go to find out the full story on the FBI’s investigation in Savannah, Georgia?

You can grab the full story—Remnants (Brandon Fisher FBI series) by Carolyn Arnold—from your favorite retailer in e-book, paperback, or hardcover formats. It’s available wherever books are sold, including the following:

All that remains are whispers of the past…

When multiple body parts are recovered from the Little Ogeechee River in Savannah, Georgia, local law enforcement calls in FBI agent and profiler Brandon Fisher and his team to investigate. But with the remains pointing to three separate victims, this isn’t proving to be an open-and-shut case.

With no quick means of identifying the victims, building a profile of this serial killer is proving more challenging than usual. How is the killer picking these victims? Why are their limbs being severed and bodies mutilated? And what is it about them that is triggering this killer to murder?

The questions compound as the body count continues to rise, and when a torso painted blue and missing its heart is found, the case takes an even darker turn. But this is only the beginning, and these new leads draw the FBI into a creepy psychological nightmare. One thing is clear, though: the killing isn’t going to stop until they figure it all out. And they are running out of time…

About the Brandon Fisher FBI series:

Profilers. Serial killers. The hunt is on. Do serial killers and the FBI fascinate you? Do you like getting inside the minds of killers, love being creeped out, sleeping with your eyes open, and feeling like you’re involved in murder investigations? Then join FBI agent and profiler Brandon Fisher and his team with the Behavioral Analysis Unit in their hunt for serial killers.

This is the perfect book series for fans of Criminal Minds, NCIS, Silence of the Lambs, Seven, Dexter, Luther, and True Crime.

Read in any order or follow the series from the beginning.