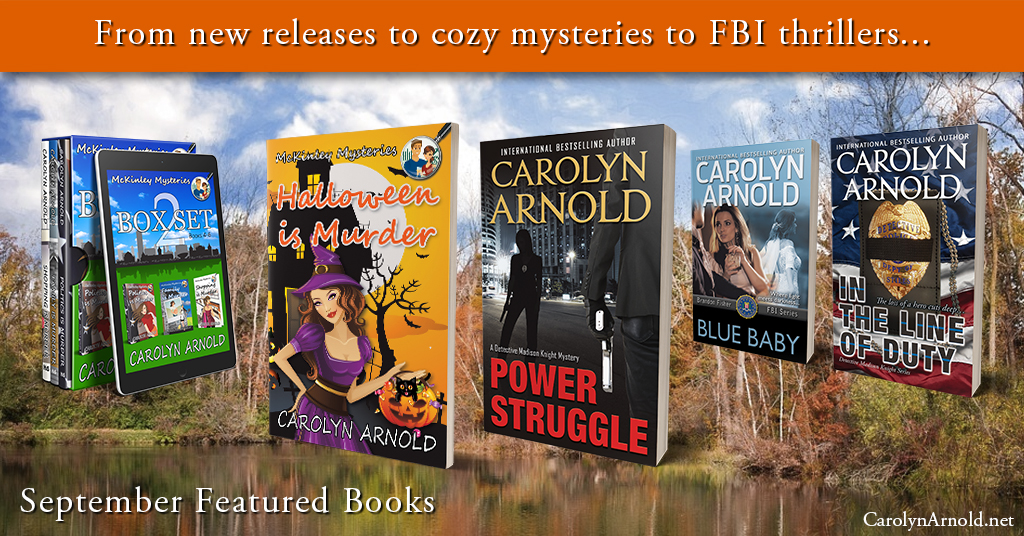 This month has it all, including new releases you’ll want to pre-order! Love Halloween, then you won’t want to miss Halloween is Murder. Love Madison Knight or police procedural novels that will make you think of Law & Order and CSI? Well, you’ll want to pick up a copy of In the Line of Duty and pre-order yourself a copy of Power Struggle. And if you gravitate more to the dark side, you’ll want to download FBI thriller, Blue Baby. Even cozy lovers can rejoice because the second box set in the McKinley Mystery series is out on September 12th!

Sean and Sara are set to celebrate Halloween in style and eager to invite the entire city to visit their haunted house fund-raiser. But when their recorded segment for a local television station goes unaired and the reporter is found dead, Sara sets out to get answers, bringing Sean and their whole PI firm along with her. There are more tricks than treats, however, as they try to carve out the truth.

FBI agent and profiler Brandon Fisher and the team are called to Grand Forks, North Dakota when a murder follows the same MO as that of a killer one year prior. This killer seems to be targeting wishful brides-to-be, and what the team uncovers will have you looking at the quest for happiness a little differently. They say happiness can be elusive, but in this case, it’s deadly.

In the Line of Duty (Detective Madison Knight series)

Her fellow officer has made the ultimate sacrifice, and Detective Madison Knight may have to lay it all on the line to bring his killer to justice. But with leads pointing in several directions, she has to narrow them down—and quickly—if she’s going to solve the case before anyone else gets hurt, including herself.