Six #MustRead #Mysteries You’ll Be Thankful for This November 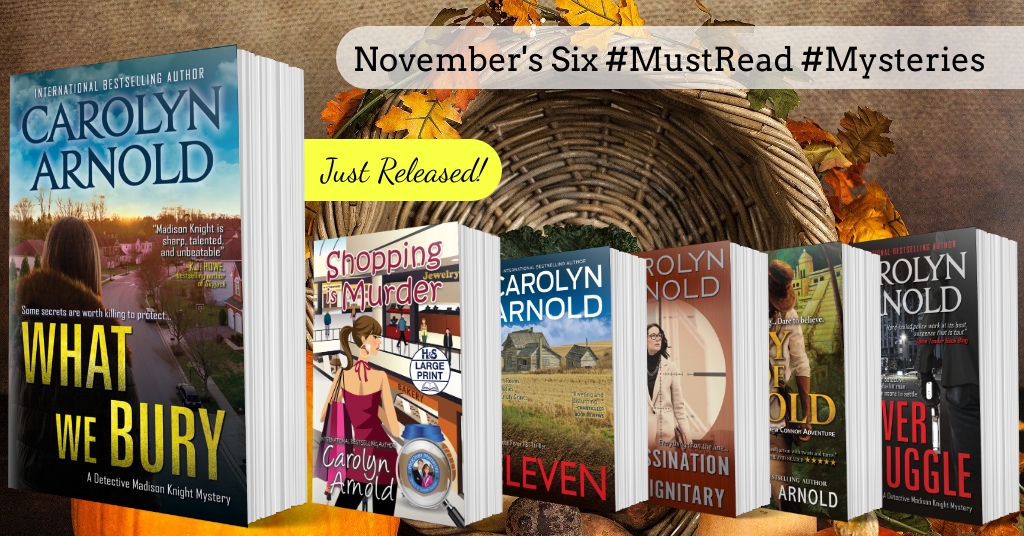 It’s that time of year for many when they’ll be sitting down with a turkey dinner and a football game on TV. But for those quiet moments when you just want to sit back and relax, feet up, and read a good book… Then I have you covered! I’ve selected six titles just for you.

Click the links below to buy What We Bury in the format you prefer.

⭐⭐⭐⭐⭐ “A thrilling mystery. Madison is a relatable heroine and a brilliant detective. She’s not perfect, but she is smart and determined. The pacing is perfect, and there are enough twists to keep you guessing, and at times you’ll be on the edge of your seat holding your breath waiting to see what happens next.” ~The Faerie Review

A READ FOR BLACK FRIDAY 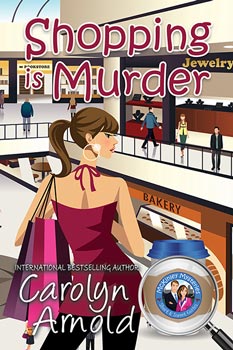 “This was such a fun read! I loved that the crime took place in the mall on Black Friday.”
–Brooke Blogs

The busiest shopping day of the year should be all about the discounts, but Sean and Sara’s trip to the mall brings them a murder to solve. Though the police think the man purposely took a flying leap from the second level to the concourse, the widow is adamant her husband would never have done that. But it’s Sara’s past connection with the widow that has the McKinleys looking into the matter.

The answers aren’t coming quickly—not with mall security dropping the ball and no seeming motive for murder. If the McKinleys are going to find out the truth, it will take unconventional means, a little undercover work, and the help of their friend Sergeant Jimmy Voigt. If they’re lucky, they just might get this case wrapped up in time for the holidays. Maybe even with a pretty little bow.

“Carolyn Arnold’s absorbing crime thriller, Eleven, is taut with suspense from the very first page… Each member of the team is distinct and well realized… Suspense builds and builds and the ending is every bit as shocking as the opening pages of the novel…  Readers will find the book difficult to put down – and, if they do, they may very well sleep with the lights on.”
–Chanticleer Awarded Review

In this international bestseller, rookie FBI Agent Brandon Fisher takes on his first case with the Behavioral Analysis Unit, but will he survive long enough to catch the killer? Eleven is a fast-paced, spine-tingling thriller that will have you gasping for breath at every twist…

When Brandon Fisher joined the FBI Behavioral Analysis Unit, he knew he’d come up against psychopaths, sociopaths, pathological liars, and more. But when his first case takes him and the team to Salt Lick, Kentucky, to hunt down a ritualistic serial killer, he learns what nightmares are truly made of.

Beneath a residential property, local law enforcement discovered an underground bunker with circular graves that house the remains of ten victims. But that’s not all: there’s an empty eleventh grave, just waiting for a corpse. The killing clearly hasn’t come to an end yet, and with the property owner already behind bars, Brandon is certain there’s an apprentice who roams free.

As the FBI follows the evidence across the United States, Brandon starts to struggle with the deranged nature of his job description. And if the case itself isn’t going to be enough to push Brandon over the edge, he’s working in the shadow of Supervisory Special Agent Jack Harper, who expects nothing short of perfection from his team. To make matters even worse, it seems Brandon has become the target of a psychotic serial killer who wants to make him—or his wife—victim number eleven.

“An exciting thriller …action the entire way.”
–The Reading Cafe

Everything is on the line…

Raymond Hunter’s dark past has returned and demands one final favor. Now fifteen years later, settled as an accountant and family man, he assumed life would be calm. He thought wrong. The Italian mafia wants him back.

The directions were simple: Kill Governor Behler and be out for good.

Despite the odd request since the mafia typically respects dignitaries, in order to protect his family, he has no choice but to accept the job. He picks the date and location Niagara Falls, New York two hundred and forty miles away. But by the time he returns home, he finds out the assassination attempt failed, his family has been kidnapped, and he has twenty-four hours to set things right if he wants to see them again.

With time running out, Raymond discovers the real reason they wanted Behler dead and finds out he’s placed himself and his family right in the middle of a mafia power struggle. What he doesn’t realize is that law enforcement is also closing in.

Buy ASSASSINATION OF A DIGNITARY – Click for Retailer Links

“This is definitely akin to an Indiana Jones story set in modern times. There is very fast-paced action and danger with some good investigative twists at the home front.”
–Martha’s Bookshelf

“Gritty and emotionally jagged, Carolyn Arnold’s Power Struggle pours on the suspense as one twisted assassin plays hide-and-go-seek with a detective who refuses to give up.”
–Tome Tender Book Blog

One female detective. One Mafia hit man. One score to settle.

Murder takes a personal turn for Detective Madison Knight when she’s called to investigate the homicide of the man who had killed her grandfather. She struggles to remain objective, but the murderer’s method and the victim’s connection to the mob has her suspecting the Russian Mafia hit man—the one who nearly killed her months ago—is back in town. Her partner thinks she’s crazy, but her worst nightmare becomes reality when the hit man makes it clear he’s coming for her and her family.

Terrified, but not about to back down, Madison must summon her courage if she’s going to protect those she loves. With the stakes higher than ever, she prepares for a final, chilling showdown.