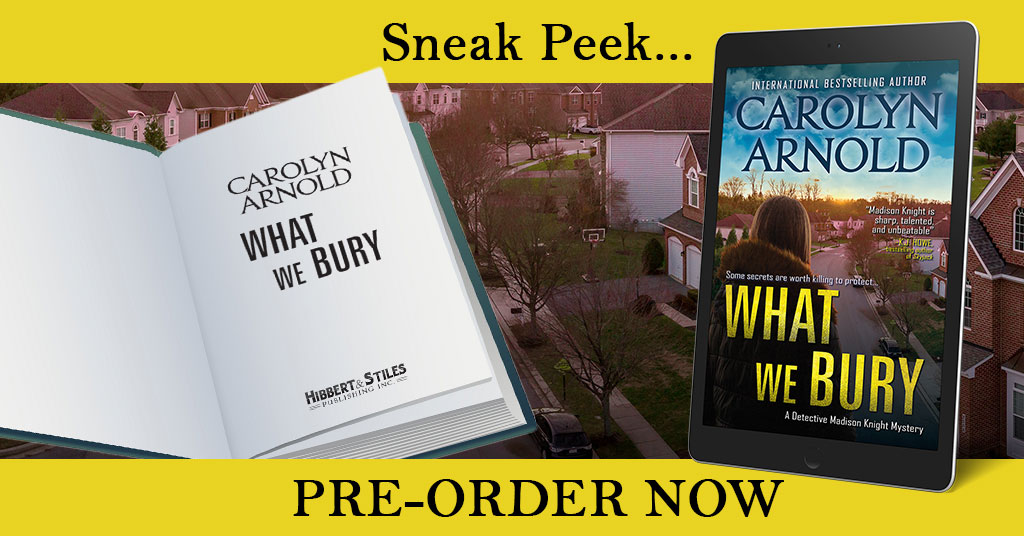 Time is moving fast and soon it will be release day for What We Bury, the next in the Detective Madison Knight series. But there’s no need to wait until October 28th to get your copy. It’s available for pre-order in ebook, paperback, hardcover, and large print edition now!

Carolyn’s newsletter subscribers got the official first peek inside before this post went live, but now you can read an excerpt from chapter one below. Enjoy!

Those two words brought Madison Knight to 982 Hillcrest Drive in the middle of a Saturday afternoon in March. It was a quiet neighborhood in the south end of Stiles, a city of about three hundred sixty thousand, and it had been her real estate agent, Estelle Robins, who’d called. When Madison saw the name on caller ID, she’d assumed Estelle had found the perfect place for Madison and her boyfriend, Troy Matthews. Boy, had she been mistaken.

Madison parked in the driveway, admiring the raised bungalow with its grayish-brown brick and beige siding. It couldn’t be older than fifteen years. The front door was under a small overhang, and that’s where Estelle was standing, her arms wrapped around herself as if she were cold, but the temperature today was unusually warm. Some of the more northern states would envy their spring-like weather in early March.

Madison got out of the car and approached Estelle. She was normally the picture of calm and put-togetherness, but her hair was frizzed around her heart-shaped face, and her eyes were wet and wide. Her brown eyeshadow was smudged beneath her right eye, but her mascara had stayed in place.

“Omigod, Madison. I didn’t know who else to call, but you’ll know what to do.”

“You did the right thing.” Madison was a Major Crimes detective with the Stiles Police Department. Troy could have tagged along, as he was also a detective for the department, but his primary role was leader of a SWAT team. Solving murders was her thing. “Where is she?”

“In the shed. I’ll take you there.” Estelle led the way to a side gate next to the garage. Her hand was shaking as she worked the latch.

Madison followed Estelle down a concrete sidewalk toward the backyard. “How did you find her?”

“There’s supposed to be an open house.” Estelle spoke over her shoulder. “I was making sure the property looked good.” Estelle stopped and hoisted a chain-link gate at the end of the walk that was hinged on the fence and wedged against the brick of the garage.

To the right was a deck, and ahead was a manageable yard. The rear of the lot was framed by mature cedars and a chain-link fence. There was another gate back there, and it appeared open.

Estelle pointed to a shed with a concrete foundation and beige siding. It was about twelve feet wide and twenty feet long.

“She’s in there.” Estelle shivered. “I can’t believe this is happening.”

What We Bury is available from popular retailers in the formats you love. Be sure to pre-order now.

Excerpt is subject to copyright protection.