The Quest for Happiness & Love Can be Deadly – BLUE BABY

“Blue Baby was one hellish, fast-paced, creep show that demanded my attention leaving me no choice but to continue reading until I had discovered who was lurking in the darkness and taking the lives of innocent victims who quickly became prey. I loved every minute of it!”
–Tammy’s Tea Time

The killer in this book “came to me” and he taught me something: true happiness comes from within. Sounds simple and you’ve likely heard that many times, but it can be hard to accept. If someone hurts us or slights us, or things don’t work out as planned, it’s easy to become upset by these things, but it’s really just an event without any energy charged to it except for what put there.

There have been days when I’ve observed my mood changes based on what was going on in my life, and let me tell you, they were up and down. That’s not exactly a sane way to spend one’s life. Rather, if I hold onto my happiness come what may, letting situations or people’s actions wash over me instead of drowning me, I keep a calm balance. I keep objective.

In Blue Baby, the unsub is targeting women who defined themselves and hinged their happiness on the relationships they were in. In fact, he doesn’t even see himself as a killer. He views himself as bringing happiness to the women he targets and believes that he is doing them a favor and acting out of love.

When he “told me” this, it sent shivers through me, because it brings up another deep thought: who is the definer of good or evil? It’s perspective. While he feels that he’s acting out of love by killing these woman, you and I would strongly disagree. And unless the FBI can stop him, the bloodbath will continue to overflow. 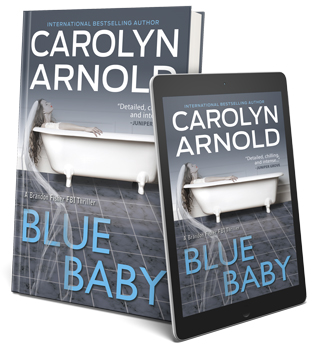 At the heart of every human being is the need—and the desire—to be happy. For many, happiness is elusive, but for one killer, it’s something to be created. But it’s not as easy as it seems at first, and this “creator” is determined to get it right at least one more time, no matter how many tries it takes…

It’s been exactly a year since Cheryl Bradley was found dead in her bathtub, dressed in a wedding gown with her ring finger severed. With no leads and no more evidence, the case had gone cold. That is, until another young woman is found murdered and posed in the same fashion.

Now, FBI agent Brandon Fisher and his team have been called in to catch the killer before another innocent life is taken. As Brandon begins to pull at every possible loose thread, the idea that the killer’s method of operation is all that connects the women begins to unravel. This serial killer isn’t just out for blood; this is a murderer on a mission.

But the closer Brandon thinks he’s getting to a resolution, the more evident it is that the killer is losing control and slipping up, making the trail even more difficult for the FBI to follow. And unless Brandon and his team can catch up to the killer, the bloodbath will continue to overflow.

Available in e-book, paperback, hardcover from these fine retailers and more.