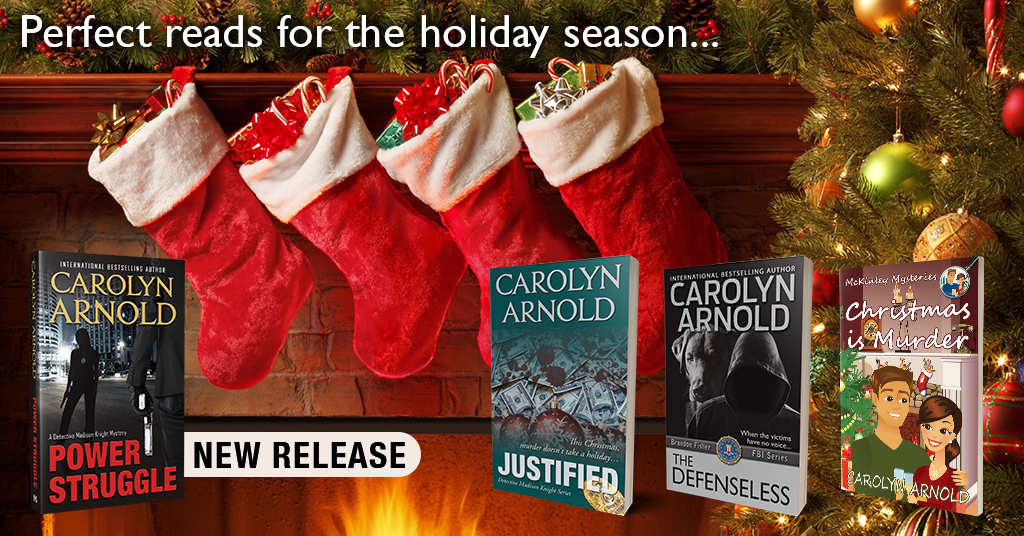 Ooh, this is my favorite time of year! Friends and family, lights and mistletoe! There’s also the sense of magic in the air and it lightens my spirit. Over the holidays, I love to watch movies, but I also love to curl up with a good book. This December, I’ve chosen to spotlight four of my books for your holiday reading pleasure. Grab a cup of hot cocoa and savor these reads… They’re also good for sharing and stuffing into stockings.

“This is the first book I have read by Carolyn Arnold, so I did not know what to expect, but from the very first page, I was hooked and was unable to put it down and ended up reading it through the night until I finished it.

To say this book was a page turner is an understatement, I read quite a lot of books this year. Power Struggle has gone straight to my number one spot of great reads of 2017 and I have now found an Author that is on my must read list.”
–Angels Book Review–Power Struggle

’Tis the season for good cheer…usually. This year it has Detective Madison Knight and her partner at a bloody crime scene trying to solve the murder of a businesswoman. If only everyone they run into during the investigation didn’t have a reason to want the victim dead, they’d have an easier time solving the case.

FBI agent and profiler Brandon Fisher and the team pack their bags and head to Colorado just before the Christmas holiday to stop an unpredictable serial killer who doesn’t stick to a single MO. But there’s a reason for that. This killer is playing judge and jury, meting out the same torture on animal abusers as they were accused of doing to their pets. This is one dark case that will have animal lovers questioning just who is on the side of justice.

Christmas is a magical time of year, but a shadow is cast over Sean and Sara’s holiday when their neighbors die in a house fire. Not able to quiet her suspicions over the cause of the blaze, Sara convinces Sean to look into the matter with her. What results is a case that will have them toeing a fine line to stay on the right side of the law and deciding if they’re going to open a private investigation firm.