Why is Everyone Talking About CITY OF GOLD? 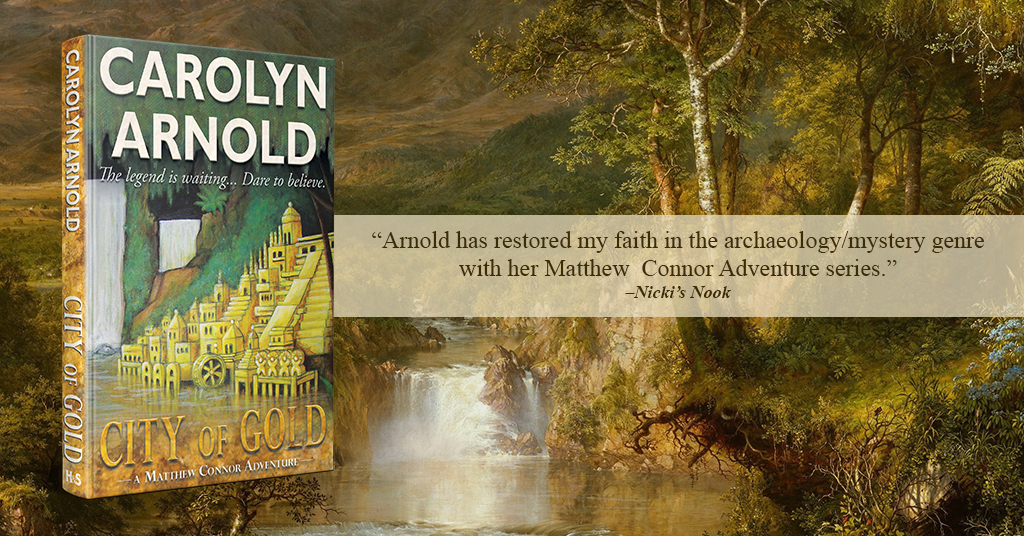 “This book has everything: a kidnapping, murder, a police investigation, and the hunt for lost treasure. A real page-turner full of thrills and emotion with excellent descriptive writing and characters that jump out of the pages and come to life.”
–Beck Valley Books

I was feeling a bit of pressure and stress when I set out to write City of Gold, my first action-adventure novel. But it was all right, because I was compelled and inspired to see it through. In order to do so, though, I needed to step outside my comfort zone of writing mysteries and into the world of possibilities and legends.

For years, I’d been so used to writing stories that are grounded in the real world as we know it with my police procedurals and playing within its strict confines to create a believable and enjoyable whodunnit. When it came to this new genre, though, I was able to take more liberties and let my imagination play in the realm of the unknown. But as it turns out, I couldn’t leave my mystery roots completely behind!

In fact, I wanted to write an action adventure that would appeal to the mystery lover. I wanted to give my readers something they’d enjoy, something that would prompt them to step out of their typical reading comfort zone and join me in this new place. Part of this manifested by means of a police investigation on the home front while my main character, Matthew Connor, and his friends were off in search of the Incas’ lost City of Gold. Really, the basis for the investigation is what prompts them to set out as fast as they do. Their friend Sophie kidnapped, and the ransom to get her back comes at the highest price: if Matthew and his friends don’t find the City of Gold for her captors, they will take her life.

To get an inside look at what Sophie is going through, take a peek at the following excerpt taken from Chapter 14 of City of Gold:

SOPHIE WAS BOUND TO A CHAIR, her legs and arms secured by zip ties. If she broke free, Liam’s clone had better run because he’d pay for this. She was certain she hated being restrained more than the average person did. Even commitment in relationships had been a challenge until she’d met Cal. And ironically, the person for whom she had made an exception was the reason she was here, captive and unable to move.

She squinted, trying to block out the setting sun that was streaming in through the wall of windows. This told her two things: one, twenty-four hours had already passed, and two, seeing the CN Tower told her she was in the entertainment district. It was a good thing because of the crowds, but a bad thing with her being so many stories up. Any cries for help would go unheard, but as it was, a gag in her mouth ensured her silence. She had tried jerking her head and contorting to no avail. She wasn’t getting out of this chair or free of the gag on her own.

The place she was being held wasn’t a hotel room. The large floor vases and sculptures looked too expensive. The paintings on the wall screamed of money, too. Based on location and the obvious wealth of the homeowner, she guessed she was in one of the newer high-rise condominium buildings. And from the angle at which she looked at the CN Tower, she’d guess it was one on Spadina Avenue near Front Street.

The last thing she remembered was being at her dream house and the man showing up. He must have drugged her, though, as a big chunk of her memory was blank. She recalled him coming to the door and holding a gun to her stomach. Next thing she’d known, she had woken up here, a throbbing pain in her head from sleeping with her neck craned to the side. And he had been filming her.

Afterward, he had made two phone calls. The first must have been to Cal, as he had used the words your girlfriend. On the second call, he had demanded to meet someone at a local bookstore. She guessed that someone was Matthew, and she surmised this all tied back to India as she’d originally thought when she first spotted the man following them.

The condo was silent now. She must be alone.

Hope was the one thing that kept her calm. Somebody was likely to notice she had been taken. The cookies and coffee would both be growing stale on the counter. The homeowners were away, but surely someone checked in on the place. And her purse. It was likely there, too.

Edwin probably wouldn’t worry about her, as she’d sometimes go a day or two without speaking to him. But Cal had to know something was wrong even before her kidnapper had called him. He would have been expecting her to call last night. She cursed herself for changing their plans.

It was quite possible no one even knew she was missing yet. And if they did, from what she saw on TV, missing persons reports weren’t taken too seriously and a certain amount of time had to pass before one could be filed. She hoped that fictional take wasn’t a derivative of real life.

The man hadn’t arrived at the mansion in a vehicle. She recalled that now. She had originally concluded she hadn’t heard one because she was in the kitchen at the back of the house, but there hadn’t been one to hear.

Did that mean the man took her here, to his place, in her car? A glimmer of hope filtered through her. If the police found her car, they’d be close to finding her. But that hope was short-lived. Toronto was a huge city with a considerable geographical footprint. The Liam guy would have had to be pretty stupid to park her car in his spot in the building’s underground garage. And what would lead police to his building in the first place? The odds were getting slimmer the more she thought things through.

If, or when, they started looking, how were they going to find her at all? There was nothing at the house to point them here. All this would be enough to drive most people crazy, but she had a fighting spirit and she was just getting fired up. With every moment she was left to stew in this chair, limited in movement, with hard plastic biting into her wrists and ankles, she had a greater sympathy for wild animals in captivity. Like them, she was ineffective at resisting her captor.

Tears filled her eyes, but she refused to give in to the overwhelming sense of hopelessness.

She slowed her breathing and strained her ears as someone shuffled outside the room. A key was inserted into the door, and it opened.

You’ve reached the end of the excerpt, but City of Gold is available in e-book, paperback, and hardcover from popular retailers.

The next Matthew Connor Adventure, The Secret of  the Lost Pharaoh, is now available for pre-order.